Come together as a team! Promote collaboration and celebrate women’s achievements through group projects that encourage creativity, generate discussion, and lead to new discoveries.

As a school or as a community, this is your opportunity to get dramatic! Create an original theatrical work (or a short film!) based on the life stories of women featured in the Women of Impact in Canada gallery. Here are some ideas to consider:

You can also adapt a play, novel or poem written by one of women of impact, such as:

Watching a film as a group is a fun way to expand your knowledge and generate lively discussions. Prepare questions and lead a group discussion afterwards to give learners a chance to share their opinions and make important connections. Consider hosting a screening of one of the following films: 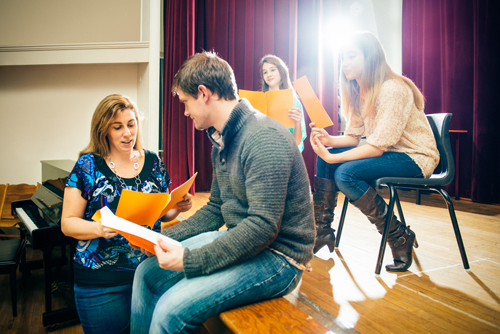 3. Create a work of public art

Find a public space in your school or community and turn it into a masterpiece! Before creating a public art display, make sure that you obtain permission from school or city officials. Here are some ideas to create public art inspired by the Women of Impact in Canada gallery:

Creating a game that challenges learners to apply their knowledge is a fun way to learn about the women who have shaped Canada’s history. To create a trivia game, develop questions and clues using information from the Women of Impact in Canada biographies or the interactive timelines. The crossword puzzle in the Games and activities section can provide ideas on how to develop interesting clues and questions.

Be creative and don’t limit yourself to simply written clues, such as listing professional accomplishments. Consider reading a well-known quote, displaying a photograph or work of art, playing a piece of music or showing a video clip associated with a woman of impact. Divide your group into teams, test each other’s knowledge and engage in friendly competition!