About the Women Deliver 2019 Conference

Canada had the honour of hosting the Women Deliver 2019 Conference, the world’s largest gathering on the health, rights and well-being of women and girls.

From June 3 to 6, 2019, more than 8,000 people from some 165 countries gathered in Vancouver, British Columbia, with an additional 100,000 people joining virtually, with a common goal: building a more inclusive and equal world where every single person—no matter who they are or where they live, no matter their gender identity, expression or sexual orientation—has an equal and fair chance at success.

And the world really was in Vancouver: thousands of organizations and young people, hundreds of journalists and people representing private sector industries, UN agencies, ministers and parliamentarians from more than 50 countries, as well as gender equality advocates and mobilizers from all Canadian provinces and territories. Internationally, Canada utilized its network of missions abroad to highlight its local and international leadership on gender equality and women’s empowerment. More than 110 gender equality events took place at over 70 missions between November and June integrating Women Deliver.

But the Women Deliver 2019 Conference was not just one moment in time, it was another important step forward in a movement for gender equality that exists throughout the world—a movement of change for everyone, everywhere. It is a movement that Canada and Canadians are leading.

At the conference, the Government of Canada made game-changing and innovative investments that promote the empowerment of women and girls and people of all gender identities and expressions:

Canada also announced new and innovative steps to transform how we invest in women’s organizations and movements. Women’s organizations are on the frontlines of action on issues ranging from economic development to reproductive health to violence, and yet, they are also chronically underfunded and undervalued. That’s why Canada is working to make sure they can keep doing their vital work that benefits people in all communities.

These are bold, innovative initiatives that have tremendous potential to change our world for the better and make Canada a global leader in supporting women’s rights organizations domestically and internationally.

During the Women Deliver 2019 Conference, attention was focused on issues that affect women and girls in Canada and globally.

We looked unflinchingly and bravely at some of the challenges we have yet to overcome. In the days leading up to the Women Deliver 2019 Conference, the Government of Canada supported two events happening concurrently with the conference: Feminists Deliver and the Nutsamaht Indigenous Women’s Pre-Conference. Both events were designed to shine a light on local, grassroots efforts to address intersectional challenges to gender equality. This was particularly relevant as, in the days leading up to the conference, the National Inquiry into Missing and Murdered Indigenous Women and Girls presented its final report to the Government of Canada.

All of these initiatives set the tone for the Women Deliver 2019 Conference: to ensure that everyone, including Indigenous women and girls, visible minorities, and LGBTQ and two-spirit people, were at the forefront of conversations about advancing gender equality in Canada and around the globe.

Cultural diversity is our strength

We also celebrated our diversity and our many successes. The City of Vancouver, Vancouver Convention Centre, Province of British Columbia, and the Government of Canada hosted Culture Night, a free outdoor celebration to unite visitors and locals amplifying the movement for gender equality through an evening of music, food, art, and cultural exchange. In addition, the BC Council for International Cooperation (BCCIC), the Pacific Peoples’ Partnership, and Women Deliver 2019 Mobilization Canada, with four non-permanent traditional Longhouses providing the backdrop, hosted a series of events and dialogues exploring issues pertinent to women and girls in BC and Canada. The Dialogues honored Indigenous ways of communicating and offered the general public the opportunity to engage in important dialogues in a safe, inclusive, and non-partisan way.

We took strength from each other, learned from each other, stood up for each other and inspired each other to be and do better. We fueled vital conversations: the #GenderEqualityMatters hashtag, for example, was used 24,495 times and had a reach of 67.5 million.

The Women Deliver 2019 Conference was a watershed moment for the gender equality movement around the world. Here at home, investments made by the Government of Canada and other Canadian partners will leave a lasting legacy of action and change for women, girls and gender diverse peoples from coast to coast to coast.

But our work is far from done. Together, we must keep building on the energy we created at the Women Deliver 2019 Conference and ensure we continue this legacy of empowerment and change that will benefit us all. 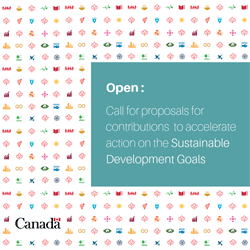 A new Sustainable Development Goals (SDGs) call for proposals is looking to support partners that are helping to advance the 2030 Agenda. If your organization is advancing research, innovating, sharing knowledge and reporting on the SDGs, this call is for you! Learn more and apply.