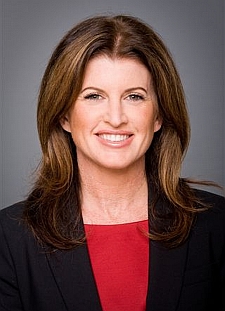 I am pleased to present the 2011-2012 Departmental Performance Report for Status of Women Canada.

As in recent years, Status of Women Canada continued its collaboration with a wide range of partners to carry out its mandate and address the Government of Canada's priorities for women and girls, focusing its efforts in three areas: ending violence against women and girls; enhancing women's economic security and prosperity; and promoting women's leadership and participation in decision-making roles.

In 2011-2012, Status of Women Canada, through its program investment and policy intervention, delivered on its priorities and achieved results that help advance equality between women and men. As well, a summative evaluation completed during the reporting year showed that the Women's Program remains efficient, financially responsible and responsive to the needs of women and girls in Canada.

One of the most notable accomplishments in the past year was Canada's leadership on the United Nations' proclamation of the International Day of the Girl, and we will make history by celebrating this day for the first time on October 11, 2012. This day is an opportunity to learn about girls and young women as future builders of families, communities and nations, and to resolve to remove the barriers that limit their potential.

On violence against women and girls, Status of Women Canada intensified its leadership and worked with key partners to address important issues, including violence committed in the name of honour. The agency facilitated dialogue and disseminated knowledge, exploring effective solutions, including engaging men and boys in preventing gender-based violence and invested almost four million dollars (over three years) on a group of projects under the theme of "Engaging Young People to Prevent Violence against Women on Post-Secondary Campuses."

Status of Women Canada also collaborated to produce Statistics Canada's 6th edition of Women in Canada. This resource provides key information on the situation of women in areas such as economic security, violence, access to education and career opportunities, and data on specific groups, such as immigrant and Aboriginal women.

Overall, I am pleased to report steady progress on improving the situation of women and girls in Canada.

The Office of the Co-ordinator, Status of Women, known as Status of Women Canada (SWC), is a federal government agency that promotes equality for women and their full participation in the economic, social and democratic life of Canada. The legal mandate of SWC is "to coordinate policy with respect to the status of women and administer related programs" (1976).

SWC is the primary federal agency responsible for supporting the Government of Canada's agenda to advance equality for women and girls. In fulfilling its mandate, the agency works with a wide range of organizations, building synergies with key stakeholders, collaborating with different levels of government and engaging the private and voluntary sectors.

SWC functions in a complex environment where advancing gender equality remains a shared responsibility across the federal government. To bring about concrete results and enduring benefits for Canadians, the agency carries out its mandate strategically, working in partnerships, focusing its efforts where there is a clear potential for making a difference in the lives of women and girls in Canada, and ensuring its policy intervention and program investments are aligned with Government of Canada priorities to assist Canadian women and girls.

In its policy function, SWC plays the role of a knowledge broker and facilitator, offering advice and support, conducting policy analysis, providing input and making strategic interventions at both domestic and international levels.

SWC works in collaboration with key stakeholders to facilitate the integration of gender dimensions in the development of policies and programs. It also promotes the application of GBA, an inclusive analytical practice that involves examining the intersection of sex and gender with other identity factors.

Through the Women's Program, SWC provides financial and professional assistance to Canadian organizations to carry out projects that advance equality and the full participation of women and girls. SWC invests resources where there is a clear potential for making a difference in the lives of women and girls in Canada.

As shown in the Program Activity Architecture (PAA) below, SWC has one strategic outcome, which is supported by three program activities, the third being Internal Services. 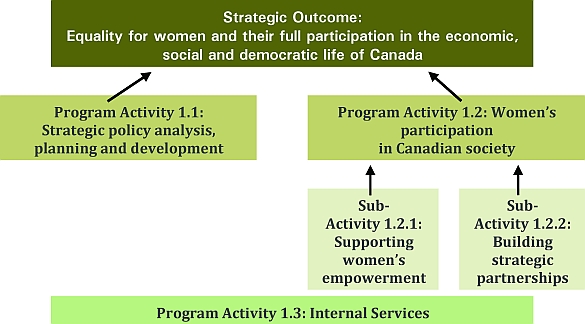 Canada continues its steady progress on advancing equality between women and men. Among the G20 countries, Canada was named the best country to be a woman, according to gender experts from five continents1. Also, Canada improved its rating from 31st in 2008 to 18th in 2011 in the global ranking of gender equality, according to the World Economic Forum. As stated in Women in Canada: A Gender-based Statistical Report, 6th edition (2012), further efforts are still needed to end violence against women and girls, to increase women's representation in leadership and decision-making roles, and to increase economic prosperity of women and girls. The issues to be addressed across social and economic domains reinforce the fact that the achievement of gender equality is a shared responsibility among federal departments and agencies, between various levels of government, and with different stakeholders. Therefore, SWC works hard to engage women and men and to work in collaboration with partners in the public, private and voluntary sectors.

Risk management is an essential aspect of SWC's business. Risk management principles and practices have been incorporated into all aspects of the agency's planning and decision-making processes. The launch of SWC's Corporate Risk Profile (CRP) in 2011-2012 signalled an important step toward enterprise-wide risk management, ensuring that risk is taken into consideration in decision-making processes, planning exercises and operational activities. In addition, SWC developed tools to manage, monitor and communicate program risks and determine the level of risk tolerance.

The increase in Total Authorities from Planned Spending is explained by the inclusion of the 2010-2011 operating budget carry-forward and paylist expenditures. The difference between total authorities and actual spending is explained by frozen allotments that represent funds withheld by Treasury Board and cannot be spent by SWC, and the planned carry-forward and compensation adjustments for 2012–2013.

This human resources table summarizes, in full-time equivalents, Status of Women Canada's staffing for program activities: planned, actual, and the difference between planned and actual during 2011-2012.
Top of Page

This table examines Status of Women Canada's strategic outcome, Equality for women and their full participation in the economic, social and democratic life of Canada. The third section compares actual spending on the internal services that support all program activities in both the current and the immediately preceding fiscal years to the main estimates, planned spending, and total authorities for 2011-2012.

In 2011-2012, SWC spent a total of $29.4 million to carry out its program activities, to achieve expected results and to advance towards its planned strategic outcome. The base budget for Grants and Contributions has remained consistent through the three fiscal years; however, the fluctuation in Main Estimates is mostly due to additional grant and contribution funding re-profiled from 2008–2009 to 2009–2010 and 2010–2011. This re-profile was temporary and does not affect the ongoing base budget.

For information on SWC's organizational votes and/or statutory expenditures, please see the Public Accounts of Canada 2012 (Volume II). An electronic version is available on the Public Works and Government Services Canada's website.2